A jøkulhlaup or Glacier Lake Outburst Flood (GLOF) is a sudden release of water from a glacier.

The sudden release of water from a glacier is called a jøkulhlaup or Glacier Lake Outburst Flood (GLOF). The water source can be a glacier-dammed lake, a pro-glacial moraine-dammed lake or water stored within, under or on the glacier. Once the water finds a way over, underneath or through the dam, large parts of the lake can be emptied in a short time (hours to days) resulting in violent floods. Such floods have caused considerable damage in the past. The term jøkulhlaup is Icelandic in origin (from the Icelandic jøkull = glacier, and hlaup = flood burst).

One way to reduce the risk of such a flood is the controlled drainage of the trapped water through artificial spillways or tunnels, either to empty the lake or to lower its level below a critical level. This has been done several glacier-dammed lakes, including at Demmevatnet (Hardangerjøkulen) and at Austerdalsisen (Svartisen).

In cases where there is no mitigation work carried out and there is thought to be potential for a glacier flood, then the glacier lake should be monitored closely. NVEs use satellite imagery to survey glacier lakes with previously registered GLOFs and detect new possible GLOF sites. 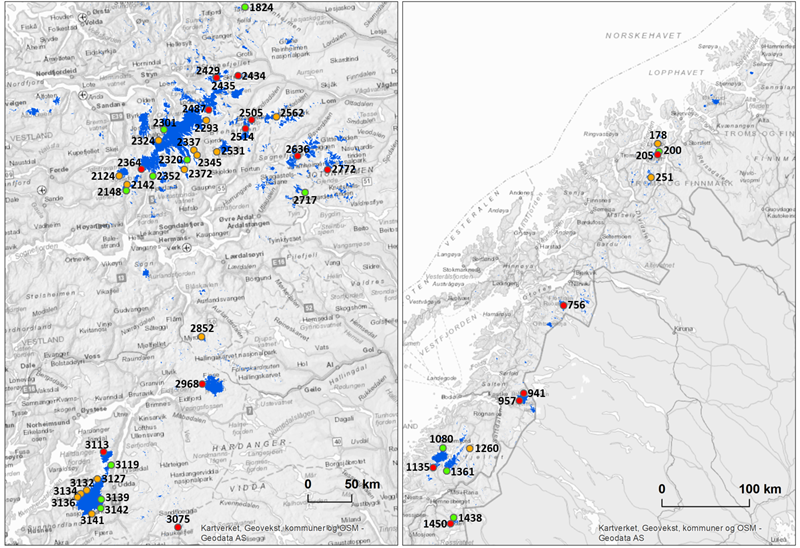 Overview of active (red), potential (green) and historic (orange) GLOF sites in Norway as of January 2022.

Jøkulhlaups in Norway in recent years

Gridabase is a database with information on glacier-related events and accidents that was established in the EU project Glaciorisk (2001-03). NVE and the Department of Geosciences in the University of Oslo participated in the project, as well as groups in Iceland, France, Switzerland and Italy.  Note that the database is not updated with newer events in Norway.

Safety on and near glaciers