Rembesdalskåka is one of 10 glaciers that has been reanalysed. The mass balance series of the glacier has been homogenised and partly calibrated. Photo: Hallgeir Elvehøy

In a new paper in the Cryosphere, NVE has reanalysed the 10 glaciers with long-term mass-balance series in Norway (Andreassen et al., 2016). In addition to the paper, three NVE reports give further details on four of the glaciers analysed: Engabreen (Elvehøy, 2016), Nigardsbreen (Kjøllmoen, 2016) and Ålfotbreen and Hansebreen (Kjøllmoen, 2016b).

The reanalysis included (i) homogenisation of both glaciological and geodetic observation series, (ii) uncertainty assessment, (iii) estimates of generic differences including estimates of internal and basal melt, (iv) validation, and, for some glaciers, (v) calibration of the mass-balance series.

In total, 21 periods of data were compared and the results show discrepancies between the glaciological and geodetic methods for some glaciers, which are attributed in part to internal and basal ablation and in part to inhomogeneity in the data processing.

Homogenized glaciological and geodetic results were in overall agreement for Langfjordjøkelen, Austdalsbreen, Storbreen, Hellstugubreen and Gråsubreen for the periods considered, but they differed for Ålfotbreen (one of three periods), Hansebreen (both periods), Engabreen (both periods), Rembesdalskåka (one of two periods), and Nigardsbreen (one of two periods). These 7 periods were calibrated by applying an annual correction factor (the annual difference between the homogenised geodetic and glaciological mass balance) to the summer and winter balances according to their relative size.

The reanalysis processes has altered seasonal, annual, and cumulative as well as ELA and AAR values for many of the years for the 10 glaciers presented here. For most glaciers the discrepancy between the “original” glaciological series as published in the series “Glaciological investigations in Norway” are small, but for others results differed significantly.

The mass balance series are now categorized as ‘original’ (as published in ‘Glasiologiske undersøkelser i Norge/Glaciological investigations in Norway), ‘homogenized’ (for selected or all years) or ‘calibrated’ (periods are calibrated with geodetic observations) in the NVE databases. The new reanalyzed and thus “official” values are available for download from NVE’s website: http://glacier.nve.no/viewer/CI/en/.

The reanalysed series shows a more spatially coherent signal over the period of measurements than previously reported: six glaciers have a significant mass loss and four glaciers are nearly in balance. All glaciers have lost mass after year 2000. 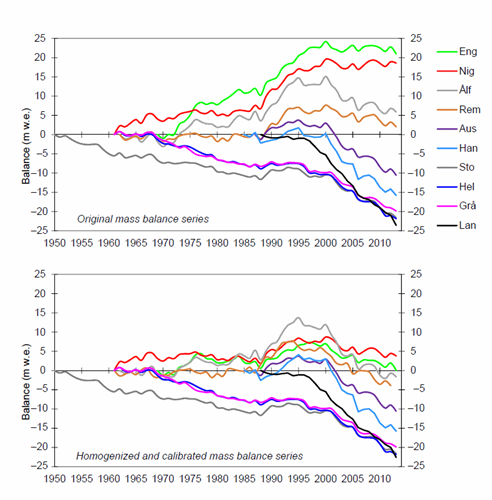