The Norwegian Water Resources and Energy Directorate (NVE) has analysed the impact of Ecodesign and Energy Labelling of products on the total energy consumption of 10 common household appliances in Norway which account for about 10 % of the total household energy consumption in Norway. These appliances are refrigerators, fridge freezers, and upright freezers, chest freezers, cooking stoves, washing machines, dishwashers, tumble dryers, vacuum cleaners and TVs.

The Ecodesign Directive requires that energy-related products fulfil Ecodesign minimum levels of energy efficiency and environmental performance. The Energy Labelling Directive imposes mandatory labelling and information requirements that indicate the consumption of energy and other resources by energy-related products, with the purpose of guiding the consumer in choosing the most energy efficient product options on the market. The first Ecodesign and Energy Labelling requirements entered into force in Norway in 1996 (for refrigerators, freezers, washing machines and some other appliances) and has since been revised and come to include more product groups. 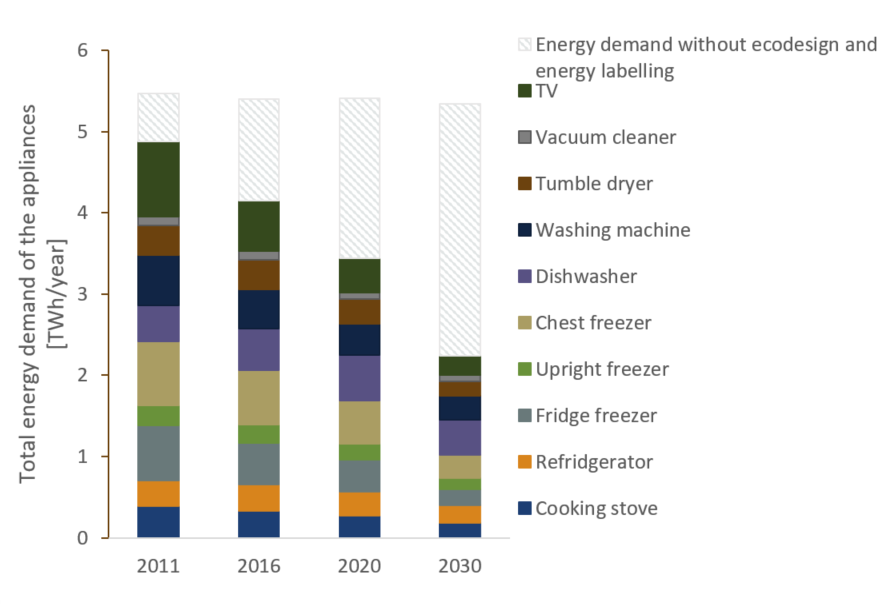 The analysis conducted in this report is mainly based on two large surveys, statistics of household appliances sold in Norway and a similar study conducted for the European Commission (2). Several assumptions and simplifications have been made in the analysis, and hence there are uncertainty connected to the results. More efficient electrical appliances results in less waste heat from the appliances, which may cause the need for energy for space heating to increase slightly in parts of the year. The study does not take into account the effect of the directives on other product groups, the increase in use of products, which are not included in the directives, or the energy use of products in standby mode. Despite the uncertainty in the results, we conclude that the Energy Labelling and Ecodesign requirements for products will significantly reduce the use of electricity in electrical appliances in Norwegian households. The uncertainty is related to the magnitude of the total reduction in energy use in 2030.

Workshop on hydrology and hydropower development in Nepal

Little snow on the glaciers